Representatives of the different establishments in Davao City joined the cue as Davao City celebrated the 12th anniversary of Smoke-Free Davao. Participants paraded through the major streets in Davao, which culminated with a celebration and awarding program at the Quezon Park, fronting Davao City Hall.

An Adventist Youth sticks on a NO SMOKING sticker on a passenger vehicle.

Dr. Domilyn Villariz, Co-chairman of the Anti-Smoking  Task Force of Davao City was overwhelmed with the data provided by her office regarding the strict implementation of the City Anti-Smoking Ordinance 0367-12. 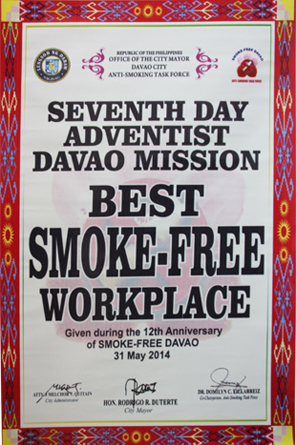 “Recently, Davao City was visited by other countries come to Davao City to learn about our Anti-Smoking ordinance,” Dr. Villariz announced. ” Davao Mission is a partner and one of our study sites. This would mean we can bring our foreign visitors anytime to this establishment. ”

“We look forward to making Davao City, not only a Smoke-Free City but also a Tobacco-Free City in the near future,” Villariz added.

“We would like to recognize the efforts of Dr. Villariz and the entire Anti-Smoking Task Force, ” Atty Quitain said. ” This is indeed a significant milestone for the city of Davao.”