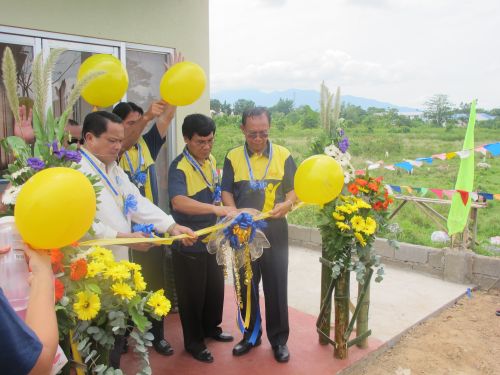 “Your music heals, your messages uplift, and we thank you for the birth of this radio in the province of Davao Oriental.”

What more overwhelming and elevating comment for a newly launched FM radio in the city of Mati could be received than this quote from the honorable Carlo Luis Peralta Rabat, vice mayor of Mati City? Into the midst of existing area radio stations comes Hope Radio, part of the network of Adventist stations in the Philippines broadcasting the hope of the soon-coming of Jesus!

June 28 marked the official launching of DXME FM 94.3 Hope Radio following almost two months of test broadcasts of the everlasting message to every home in this coastal city and province. As a direct result, 10 new converts have been added to the Adventist faith.

Located on wide plains and surrounded by government offices and infrastructures, the imposing 150-feet tower and its broadcast station transmit messages of hope and what listeners labels as “heavenly music”. This tower symbolizes the advent of a new era of communication in the church in the Philippines. Now the third in a widening network of Adventist radio stations, DXME FM joins DXHR in Butuan City in northeastern Mindanao, and DXCR at Mountain View College in Northern Mindanao. Soon a fourth station will launch in Iligan City to reach the western Mindanao territory in the southern Philippines.

Vice Mayor Rabat donated the large portion of land where the DXME FM broadcast facility now stands. He expressed his joy that a new media facility has come to his town and feels it is “not just another station of similar nature but has something better for the community.”

Attendants at the local government hospital agree. They noted that “we’ve switched to DXME from our previous rock station because our patients are healing faster when they hear its ‘healing’ music.”

President Leonardo Asoy and his fellow officers from the headquarters of the Seventh-day Adventist Church in southern Philippines (SPUC) joined the officers, directors and pastors of the Davao Mission (DM), the church comprising the wide territory of Davao City, Davao Oriental, Davao Del Norte, and Davao Del Sur. In addition, more than a thousand church members attended the grand launching of the radio station. Dr. Jonathan C. Catolico, communication director of the church in the southern Asia-Pacific region (SSD), was also among the invited guests and speakers.

Pastor Jerry Patalinghug, DM president, expressed the church’s appreciation to those whose great contributions made the dream of a radio station in this area a reality. He especially thanked Mr. and Ms. Emmanuel I. Billones, the owners of the Century Broadcasting Network, who enabled the church to obtain the radio frequency and make use of resources for the advancement of God’s work. Likewise, he thanked Vice Mayor Rabat for his generous gift of land.
After the launch, a two-day religious festival to celebrate God’s wondrous blessing of media ministry was held. Multiple radio announcements resulted in a large number of worshippers on Sabbath. They came to listen to the messages and lectures presented by regional, island-wide and mission-wide representatives from the communication departments of these three church governance levels.

Leaders note that exciting developments are expected in the future through media ministry. “The church is beginning to harvest results of our TV and radio broadcasts as people hear the wondrous love of Jesus through the airwaves,” said Pastor Nelson D Paulo, SPUC communication director. “Here in Davao, we want our church members to know that very soon a television station will join the media network in order to hasten the Lord’s coming. You are making this unprecedented endeavor a big success with your wholehearted financial and moral support,” concluded Pastor Filomeno Delgado, DM communication director. [AND Staff]